Maybe you’re about to sit down for your first game of Dungeons & Dragons. Maybe you’ve played before but you’re joining a new group. Maybe your last character died and you’re making a new one. Regardless of the situation, making a D&D character is one of the most important parts of playing the game. Choices you make in character creation can affect the next few weeks, months, or even years of your life. Luckily, it’s hard to make a useless character in the newest edition of D&D unless you’re deliberately trying to do so. Rather than giving you the nuts and bolts of the game mechanics at play, I’ll be focusing on the character and personality aspects of making a new character.

The first step in making a character is to get in touch with your Dungeon Master about the expectations of the game.

What’s the game’s vibe? I remember joining a new group in university with a serious priest character, only to find that the rest of the party were Mexican Wrestlers. Get on the same page if your DM or fellow players run more serious or silly, as that can help you avoid these mismatch situations (unless that’s what you’re going for).

How long is the game going to be? Let’s say you make your character the eighteenth son of a noble family who has suddenly been thrust into the limelight after the mysterious and meticulously-detailed disappearance of their seventeen older siblings and their pet teacup-alligator. They’ve now sworn a blood oath to find their siblings, and they have developed a set of carefully-chosen idiosyncrasies resulting from this experience. That might be a cool character to play, but if the game is only going to last one session then it’s a lot of wasted effort. Similarly, if you think a game’s gonna last for months, showing up to the session with the character of “his name is Josh and he likes to smash goblins” is also an issue.

Does the DM or your fellow players expect you to take on a specific role within the party? Maybe you’re joining a game in progress and taking over a certain character, in which case most of this post’s gonna be useless. Maybe your DM is one of those loonies who cares about “party balance” and wants you to occupy a certain archetype (e.g. The Healer, The Muscle, etc.). Are you playing another character’s long-lost parent? The mayor’s estranged daughter? The Mind Flayer’s childhood lacrosse buddy?

Bottom-Up means starting with the crunch and explaining why they are the way they are with some fluff. It’s deciding that I want to play a Halfling Necromancer Wizard first, then figuring out why she became a wizard, why she raises the dead, and what her personality is like. Is she a bubbly and excitable weirdo who doesn’t see a difference between life or death, or a deeply haunted and somber woman who regretfully raises zombies to accomplish her deeply serious aims?

Let’s say your fellow players or DM want you to play a particular archetype. I generally think this is a bad move, as the benefits of having a diversity of character roles in a party is always overstated. My players in my last campaign had no dedicated Wizard-type and they got along just fine. Regardless, if this is the situation you’re in, you’re not actually as limited as you think.

Let’s say the party thinks they need a healer. These weirdos think that real adventurer need all of their organs INSIDE their bodies at all times. What a bunch of cowardly morons. Anyway, you’re now in a Bottom-Up scenario. You’re starting from a place of “healing capabilities”, and now have to build a fully-fleshed out character from there.

Let’s say you start with the obvious. They asked for a healer, so you’re gonna give them the healiest healier that ever healed. You decide to play a Cleric of the God of Life, picking all healing spells. You take medicine as one of your skills, even though it’s redundant with your already-redundant healing magic. You name him something doctor-y like Dr. Suture Armcast McDoctor or David Finkelstein, and you fill in his Ideals, Bonds, and Flaws with some variation of “I like healing a bunch”. You’re filling the role of healer, but you’re probably not having as much fun as you could be. You’ve created a one-note character, who’s going to feel useless when everyone’s at full health.

One option is picking more interesting mechanics. While Dr. McDoctor the Life Cleric seemed like the obvious choice, there’s more than one way to heal a skinned cat. Bards, Druids, and Favoured Soul Sorcerers get as much healing as any non-Life Cleric. Celestial Warlocks and Paladins also have access to what’s likely enough healing for any adventuring party. I once saw a Rogue take medicine expertise and the Healer feat, playing a literal physician in a world where healing magic exists. He called healing magic cheating, viewing Clerics as snake oil salesmen and quacks. Playing any of these other options as a dedicated healer can be more interesting than playing the one-note Dr. McDoctor, as they give you more meat to work with.

Another option is to take a more Top-Down approach to making Dr. McDoctor interesting. Sure you mechanically care about healing, but ask yourself what healing means to your character. Maybe they’re not as enthusiastic about healing.

Maybe your character lost a loved one to disease and committed themselves to learning healing to never allow someone to die on their watch again. Healing is of profound importance to them, and seeing their party injured brings back these dark memories.

Physically weak, maybe the only way they could join the military and leave their backwater town was to learn healing magic. They resent their healing gift, because it’s not their true passion. Just like you, the player, probably.

In a sillier game, maybe they view themselves as their adventuring party’s kindergarten teacher, and only heals them if they ask nicely and show good manners. Healing is perfect positive reinforcement, just like a participation ribbon or a gold star.

Let’s say you have license to choose what you want to be. You have a blank canvas to work with, but no character is coming to you right now. You decide to pick a cool or effective mechanical starting point.

The default Half-Orc Barbarian is a powerful oaf who is quick to anger but slow in the head. They’re socially inept and unhygienic. What if your character diverged from one of these aspects? What if they’re perfectly in control of their temper, and their rage ability represents a moment of intense focus. What if they’re actually socially suave, learning long ago how to use their unique upbringing as a conversation starter. What if they hate violence, using it only as a last resort?

Let’s say you take a unique mechanical starting point, like a Half-Orc Wizard. You like how the class abilities mesh with the race, and want to give something more unconventional a try. Giving them the standard Half-Orc or standard Wizard personality would be doing a disservice to your concept. How was their Half-Orc status treated within their Wizard academy? Would nobody teach them at first because of their heritage? How has their pursuit of magic been seen by their family or tribe? Why did they pursue magic in the first place? There’s always a story behind every race and class combination that’s waiting to come out.

Building a character from the Top-Down, on the other hand, involves starting with the fluff and building the crunch from there. You start with a story, a piece of art, or a personality and build from there. 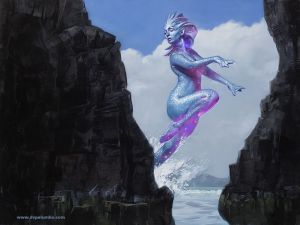 I played a nautical-themed game once. I had complete free reign in terms of what character I wanted to play. I wanted to play the survivor of a shipwreck. Rescued by a Naiad, a sort of water spirit, he lived Tom Hanks-style on a deserted island under the creature’s care until he was discovered by a merchant ship. He now owes his life to this spirit, and wants to find her to give her thanks. None of these story elements were emblematic of a given race or class. I could play a Cleric, devoted to the God of the Sea since being rescued. I could go for a Storm Sorcerer, imbued with the magic of wind and wave from his time with the Naiad. A Ranger could focus on besting the seas to track the Naiad down, while a Rogue could represent his unsavoury history aboard the ship before being given a chance to start again clean. I ended up building him as a Wizard, who focused on location spells to hopefully find the Naiad again. 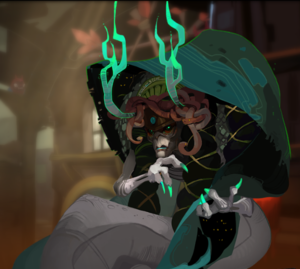 When I was thinking of a character to play in a new game, the image of a character from the video game Pyre kept entering my head. Hunched, elderly, with spectral horns and glowing eyes. I wanted to play a crotchety old character, still keeping up with the young’uns but also deeply over all of this adventuring shit. I decided that the art would be best suited for a Tiefling Druid. From there, I had to figure out why and how they received their Druidic training, how they viewed their place in nature, etc.

The DM tells you that it’d be cool if someone plays the nobleperson who’s financing your intrepid band of adventurers, the recently rescued son of the Duke, or someone with a connection to the local bandits. Your assignment, should you choose to accept it, is to make a character to fit that role. You don’t have any sort of mechanics in mind, but you need to pick something that would fit that role. Let’s say you go with the last option, a former (or current) bandit. The obvious choice would be to play a Rogue, in which case your assignment is to make a bandit rogue interesting. But what if your Rogue had a specialized role within their gang? What if they were the resident Cleric, sworn to a God of trickery and patching them up when they got in over their head. A Ranger who scouted ahead to locate local caravans and set them up for an ambush. An Illusionist who fooled people into thinking that the trade route went right into their camp. Sometimes the first idea you have isn’t always the most interesting.

To give yourself enough ammunition to work with when making a character, try and have an answer for each of these questions:

Here’s some more optional/silly questions you can ask about your would-be character:

Whether you’re playing against stereotypes or leaning into them, having a more robust character can make the game more enjoyable for yourself and your fellow players. It can be tempting to play a “neutral” or “default” character, but D&D is at its best when characters have big personalities or interesting points of view. You might be stuck with them for a long time, and giving the DM more meat to work with can be really rewarding. Not everyone needs a twenty-page backstory, but asking yourself a few questions can help you add more nuance to your roleplay. Feel free to think about these things after you’ve made the character as well, it’s never too late to reinvent or add more depth to an existing character.